Aim of the Workshop 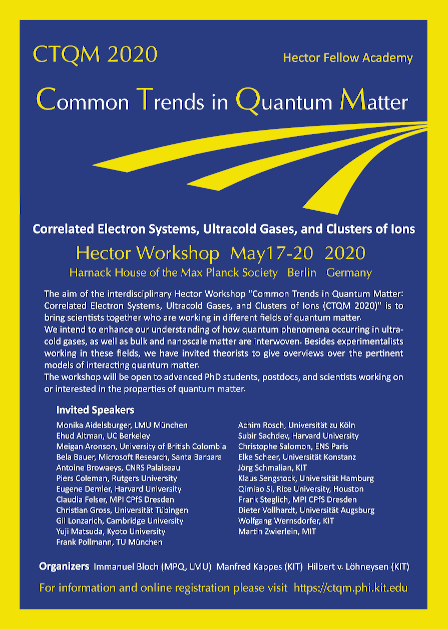 In condensed-matter systems, quantum mechanics and quantum dynamics play a decisive role. Contrary to traditional belief, quantum effects are not only manifest on microscopic length scales, but govern the properties of condensed matter on macroscopic length scales as well. Magnetism and superconductivity are such bulk-scale quantum phenomena. Superconductivity is governed by the properties of a macroscopic wave function. The Kondo effect, a hallmark of correlations between electrons in metals, is a many-body quantum effect entangling local magnetic moments and conduction electrons. Again by the laws of quantum mechanics, these local many-body quantum systems when arranged in a stoichiometric crystal, conspire to form a Fermi liquid, i.e., a quantum state of interacting electrons.

Ultracold atomic gases in optical lattices provide an alternative road to quantum matter with strong interactions. In these systems, atomic distances and interactions can be tuned externally in a hitherto unprecedentedly large range of parameters. In addition, atoms can be observed down to the level of single particles with single lattice site resolution, thereby enabling unprecedented ‘snapshots’ of the atoms that allows one to detect novel forms of correlations between the particles. A common theme in both classes of systems is the investigation of quantum phase transitions, i.e., transitions at absolute zero that are tuned by a non-thermal control parameter. These transitions are governed by coherent quantum fluctuations essentially extending over the whole bulk specimen, providing yet another level of quantum effects. The entropy of a system near a quantum phase transition at finite, albeit low temperatures is strongly enhanced with the consequence that the system may undergo a transition into an alternative state. The occurrence of superconductivity near quantum criticality is one example.

Ordered assemblies of atomic ions in electrostatic traps offer a further approach to controlling quantum matter by light interactions. Such assemblies can also be thought of as expanded ionic clusters. Cluster compounds comprising ligand-stabilized metal ions can be synthesized with atomic level control of the position of interacting d and f electrons. Addressing them at ultralow temperatures remains challenging and has so far been limited to single-molecule devices comprising molecular magnets.

The aim of the interdisciplinary Hector Workshop "Common trends in quantum matter: correlated electron systems, ultracold gases, and clusters of ions (CTQM 2020)" is to bring scientists together who are working in the fields of quantum matter sketched above. We will include a discussion of quantum simulators based on trapped ions as well as the fabrication and readout of single-molecule qubits. This might also enhance our understanding of how quantum phenomena occurring in bulk and nanoscale matter are interwoven. Besides experimentalists working in these fields, we will also l invite theorists to give overviews over the pertinent models of interacting quantum matter.

last change: 2020-02-10 KIT – The Research University in the Helmholtz Association